Today was another very interesting but different day. There were no off-campus trips planned and we were scheduled to join in some classes with the students here at Hilltop. Our day started by meeting a few new students and introductions back and forth in Charlotte's English lesson. Her students had created a role-playing game and a cool card game named "Mafia" that were enjoyed by all. We also divided up into small groups to communicate and play Foosball, Billiards and Air Hockey. The boys noted how much they enjoyed the computability factor of the classroom. Next, we participated in a group session, directed by Jan, where we discussed several clinical topics while enjoying coffee, tea and hot chocolate. It was quite nice to see the boys open up a bit and share some positives about their experiences in Europe and challenging factors as well. According to our boys, compared to the clinical groups at Chamberlain, it was a very different format with less structure but also more structure that allowed for feedback from the Danish peers as well as the Americans. I believe we learned a lot about ourselves in that session. After another wonderful Hilltop lunch buffet, it was off to Danish language class. The teachers, Charlotte and Lone, had certainly worked hard with their students prior to our arrival to be able to discuss the nuances in the Danish language and the comparisons to English. After attempting to speak some words, it is very apparent why Danish is one of the most difficult languages in the World.  After learning some rudimentary skills, we went off in small groups to work on common phrases. As the school day came to a close, the American boys were escorted to downtown Skive by Paw to do some of the normal teenage stuff like getting sodas and candy bars while just hanging out and talking. When they all returned it was time to cleanup and get ready for a fish dinner served with homemade bread, boiled potatoes and authentic Danish gravy. The boys then went off to one of the common areas to watch a movie on Netflix. Just about curfew time, Hunter and Tomas were hungry and decided to make some grilled ham and cheese sandwiches while David and I chose to have bacon wrapped chocolate. Larry ate the remnants of a pulled pork sandwich and Ryan opted for cookies and bed. 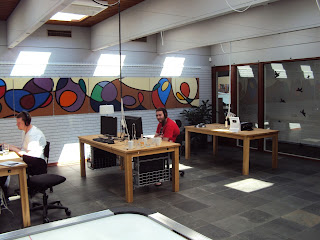 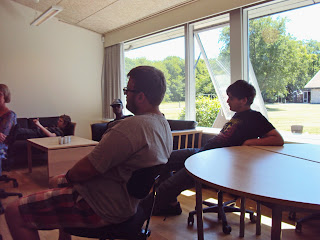 Posted by sdavignon at 7:02 AM